Press Release:-Summary of Presentation on Achievements and Challenges Facing Drugs For Neglected Diseases Initiative and The Impact of COVID-19 Pandemic 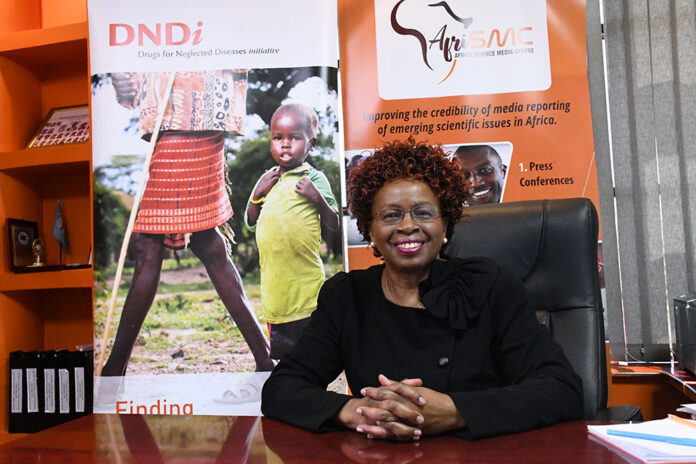 Dr Monique Wasunna, Director Drugs and Neglected Diseases initiative (DNDi) Africa said there are over one billion people affected by Neglected Tropical Diseases (NTDs) worldwide. Approximately 500 million of those who are affected are children, while at least 1 in 8 people suffer from one of the neglected diseases.

Addressing Africa journalists during a Press Briefing, organized by the Nairobi-based Africa Science Media Centre (AfriSMC), Tuesday, January 26, 2021, Dr Wasunna said most of the NTDs are a group of preventable and infectious diseases that affect the marginalized and poor populations living in remote areas, urban slums, or conflict zones all over the world. Generally referred to as neglected diseases owing to the little financial incentive to support desperate need for medical research and innovation to bring news tools to help such cluster of people.

So, as a results of this financial mismatch, about 1.7 billion people worldwide are affected by NTDs. Almost every country worldwide is at least infected by one of the NTDs. At least 40% of the global burden of the NTDs is on African continent.

“Since NTDs are diseases which are neglected, there are very few treatments that exist for neglected patients. And even if there is, the treatment could be toxic (not safe) and low cure rate and effective yet again with minimal options available to access,” Dr Wasunna regretted.

She emphasized that countries in other continents may have the NTDs but fewer compared to Africa with most countries having at least six of NTDs. In the previous years, many researches have been carried out on NTDs unsuccessful showing lack of research and developments.

“Chemical entity is a drug that is started from a scratch and developed gradually through pipelines until it’s ready for human use. So, the new chemical entities were just 1% again showing lack of research and development.” The NTDs Expert emphasized.

However, Dr Wasunna disclosed that currently there is less than 0.5% of the 88 000 drugs in the global innovation pipeline target NTDs even though they represent more than 10% of the global disease burden.

According to Dr Wasunna, 90% of Research & Development being done are for diseases that affect only 10% of the population hence an ineffectual imbalance. Therefore, she explained this was the reason for DNDi establishment to respond to the frustration of clinicians and the patients.

“Dr Wasunna explained: “To date DNDi have been developing new treatments for people living with neglected diseases. Thereby acting in the public interest, thus bridges existing R&D gaps in essential drugs for NTDs by initiating and coordinating drug R&D projects in collaboration with the international research community, the public sector, the pharmaceutical industry, and other relevant partners.”

So, DNDi as none profit drug and research & development organization, aims at saving lives and improving the health of people living with neglected diseases by using an alternative model to develop drugs for these diseases, and by ensuring equitable access to treatment around the world.

Dr Wasunna affirmed since 2007 to date, at least 8 new treatments have so far been delivered by DNDi. For instance:  ASAQ, which isa new combination to simplify malaria treatment (2007), ASMQ for malaria used in Africa and Asia (2008), NECT for sleeping sickness (2009) SSG+PM Visceral leishmaniasis in East Africa (2010), Paediatric benznidazole which is easier and safer treatment for children with Chagas disease (2011), New VL treatment in Asia for supporting disease elimination (2011), Superbooster therapy a more effective treatment for children with HIV who also have TB (2016) and Fexinidazole: a paradigm shift for sleeping sickness(2018).

She revealed DNDi is now aiming at a 25 patient-friendly treatments by 2028. By 2025-2027 the target is a radically improved treatments with new chemical entities, all oral for a treatment shift.

NTDs are caused by a variety of pathogens such as viruses, bacteria, protozoa and parasitic worms. NTDs persist under conditions of poverty and are concentrated in the developing world, most NTDs are not transmitted from person to person, although there are exceptions e.g., Leprosy and Trachoma.  About 1.7 billion people are affected by at least one NTD, while LMICs are hit the hardest by NTDs, poor people in wealthy nations aren’t immune. e.g., Chagas & Chikungunya in the USA. Many NTDs are treatable with existing drugs. However, many of the treatments are difficult to administer and inaccessible

Instead of going to the hospital patients visit witchdoctors. e.g. lesions for patients with VL, uptake of medicines is suboptimal, and patients face stigma. Those with NTDs are often stigmatized, not enough attention and awareness about the diseases, not enough R&D for NTDs, patients do not seek treatment and are thus greatly impacted by the diseases.

NTDs in the face of COVID-19

The outbreak of COVID-19 has affected implementation of health services including NTDs.

The main programmatic areas of disruption are: Slowing down of much needed NTD R&D activities, community-based activities, delays in diagnosis, treatment, delays in manufacture, shipment and delivery of NTD medicines, re-assignment of NTD personnel to the COVID-19 response. These disruptions could increase burden of NTDs, and delay the achievement of public-health goals and While R&D for vaccines is ongoing, it is important to also focus on finding the best treatment for COVID-19.