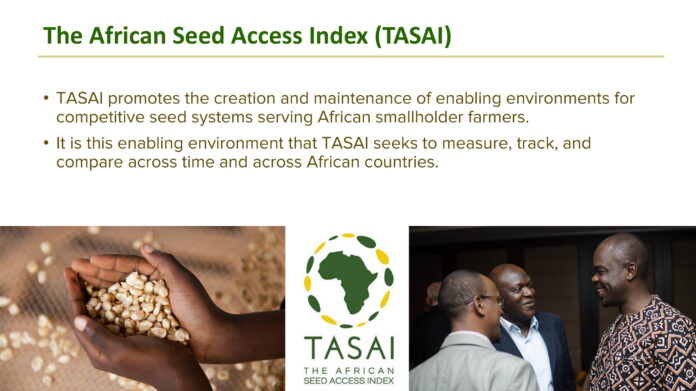 Nairobi, 1 October 2021– Though improved seeds can deliver state of the art technology to farmers: higher yields, diseases and pest resistance, climate change adaptation, improved nutrition and longer shelf life among others, their uptake remains low in the African continent.

According to Dr. Ed Mabaya, Chief Scientific Advisor, The African Seed Access Index (TASAI), only about 30% of African farmers are using seeds that have gone through some form of breeding program.

“Most of them are using seed that is inherited from their parents or recycled from the previous generation,” he said during an Africa Science Media Centre (AfriSMC) press briefing.

Part of the problem, Dr. Mabaya noted, is that the seed system on the continent is highly complicated as multiple players make the process more complicated than it is in developed countries.

Additionally, Dr. Mabaya observed that the breeding programs in Africa are dominated by production of staples, especially maize. This, he said, is mainly driven by the demand and supply as most African communities prefer maize to other crops.

In Kenya, for example, where TASAI tracked breeding programs of four crops: maize, beans, sorghum and cowpea, of the 81 varieties of improved seeds released between 2017 and 2019, 63 were maize seeds.

When Africa is shifting its agenda from food security to food and nutritional security, he said, there is need to move from the dominance of staple crops, such as maize, to other varieties such as legumes and other grains.

Also, Dr. Mabaya observed that despite progress in diversity of sources of basic seeds (seeds used by companies to produce commercial seeds) most countries are still dependent on public sources, such as national agricultural institutes and international programs like the Consultative Group on International Agricultural Research (CGIAR).

“In countries with advanced seed sectors, seed companies are maintaining their own seeds, for example in Kenya, where about 64% of companies are maintaining their own basic seeds,” he stated, adding that in emerging seed sectors, the reliance is still heavy on the public  breeding  programs like in Ghana where 83% of basic seeds coming from national agricultural institutions.

In maize seed production, Dr. Mabaya observed that there was lack of competition as only few companies dominated the market in most Eastern and Southern Africa countries. “Competition breeds excellence and the more competitive market we can have the better it is going to be for small holder farmers,” he said.

Notably, government subsidy on seed programs dominate the seed sector in most countries. In Ghana, for instance, the government is the single largest buyer of seed for soya bean (86%), maize (90%), rice (83%) and cowpea (68%), according to statistics from TASAI.

As a result, Dr. Mabaya notes growers have become over reliant on government input subsidy program with low volume of seed going through agro dealers or from seed companies to farmers, yet these avenues are more sustainable than the subsidy pathway in the long run.

Moreover, the government payment to seed companies and producers under subsidy programs is inefficient in most countries. ”Most seed companies are small and constrained on cash, the late payments by governments affect their working capital,” he said.

“Some of these numbers need to go down and there also needs to be standardized and transparent way of measuring this cost of variety release, otherwise, if the cost remains very high, there is going to be very few varieties released on the market and ultimately small holder farmers will have very few options for varieties that they can plant,” Dr. Mabaya cautioned.

The low number of women in the seed sector is another challenge, with about 1 in 10 seed companies in Africa being led by women.

“The field has been male dominated from the beginning. Many of the breeders are still male and many of the people who work in the government in this particular field are still male. This is usually the pathway it takes to get into the seed business for several African countries,” Dr. Mabaya stated.

He added that having increased number of women participating in the sector might ultimately increase access to improved seeds by women in the rural areas as users as they might have better ways of targeting women.

Dr. Mabaya recommended the need to embrace private seed inspectors to complement the public inspectors and ensure the quality of seed being produced.

The packaging also remains a hindrance to smallholder farmers accessing improved seeds, with countries such as South Africa, Malawi and Nigeria among others having low uptake as a result.

“If seed is going to be distributed or targeted to small holder farmers, most of them feel comfortable buying seeds in small packages. Small holder farmers are not going to buy a 25 kgs bag of seed but if you can break this down to packages as small as 2kgs, you start to see that there is high uptake numbers,” he said, noting that countries like Kenya and Tanzania are already doing that and the uptake is high.

Counterfeit seeds is another issue that small holder farmers grapple with. Most countries have not put in place reporting mechanisms and stiffer penalties to curb the vice, he noted.

He praised innovations in some countries to help fight seed faking. In Kenya and Uganda, have adopted seed tracker and authentication systems for farmers to enable farmers ascertain authenticity of the seed.

In Nigeria, seed is monitored from the time it is produced and developed from research institution, to the seed producer all the way to the outlet where the farmer buys it. Mabaya said TASAI is pushing for stiffer penalties for people caught selling these fake seeds because they have grave consequences.