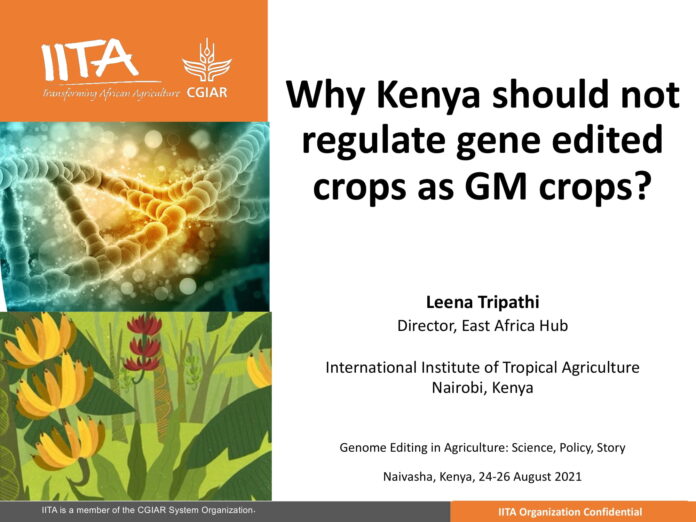 Naivasha, 31st August, 2021-With the increase in population and demands for more food, African countries are looking for ways of boosting food production. This includes recognition of new technologies and approaches such as gene editing.

Speaking during an Africa Science Media Centre (AfriSMC) press briefing on the need not to regulate gene edited crops like transgenics, Dr. Leena Tripathi, Director East Africa hub, International Institute of Tropical Agriculture (IITA) explained that gene editing is a group of technologies that give crop scientists the ability to make permanent and heritable precise changes at specific sites in the plant genome.

Dr. Tripathi said Kenya should not regulate gene edited crops like genetically modified crops because the final products do not have any trace of foreign DNA.

Likening the technology to other traditional methods of improving crops, Dr. Tripathi said that the difference is that gene editing is precise and takes a short time.

“Scientists normally use gene editing technology targeting the plant’s natural DNA to make the precise changes without bringing any foreign DNA into it and that could also otherwise happen through traditional methods like spontaneous mutations or chemical mutagenesis but in most cases that would not be as precise and also they take much longer compared to the gene editing,” she said.

Dr. Tripathi stated that there are three types of genome editing which are categorized into site-directed nuclease systems (SDN) 1,2 and 3 based on the process.

In SDN 1, the nucleases rely on non-homologous end-joining (NHEJ) to repair double-strand DNA breaks in plants which results in gene silencing or gene knock out or change in the activity of a gene.

The repair occurs when there is a donor template and it is a homologous combination which can result in SDN 2 or SDN 3. In SDN 2, very small correction is done allowing introduction of mutation at the target site while in SDN 3 there is full gene insertion which can be from the same plant or other plant species.

“The SDN 1 and SDN 2 types are very similar to mutations obtained through chemical mutagenesis, irradiation or spontaneous natural mutations because those are the small changes which can happen in nature,” she said, noting that they are not regulated in many countries.

Globally, Argentina was the first country to develop regulations for gene edited products on a case by case basis. If the product has no foreign gene integrated in them, they don’t treat them similarly to the GMOs, which has to go through lengthy, costly regulatory process before approval.

In Africa, Nigeria is the first country to develop gene editing guidelines. To do this, the country revised its National Biosafety Management Authority Act to include genome editing. Some countries have discussions going on including Kenya where there is a draft guideline in its advanced stages.

According to Dr. Tripathi, there are two main biosafety concerns with gene editing, including unwanted genetic changes in plants due to off-target mutations. However, scientists take care of this from the very start of product development at the time of gRNA design to minimize the potential off-target mutations, she said.

“When we design the CRISPR/Cas9 agent, we select the gRNA with high efficiency for targeted mutation with no or very low probability of potential off-target mutations. Further you can deliver the CRISPR/Cas9 reagent to the plant cell using a DNA-free method, in this case you just use the protein and the guide RNA. When delivered to the plant cell, they just create the mutation and after that they get degraded in short period of time. The CRISPR/Cas9 reagents are there for a short while only to make the targeted mutations and not long enough to create off-target mutations,” Dr. Tripathi explained.

She added that when the gene edited product is developed, scientists always do an off-target analysis to make sure that there is no off-target mutation in the product which is going out to the field.

Another concern is the transgene integration –whether there is a foreign gene integrated into it. This is done in two ways.

If the immediate product is transgenic or genetically modified, the product goes into the breeding program and is crossed back to segregate out any transgene which is integrated and the final product has no foreign gene, Dr. Tripathi explains.  Also, the scientist can use the DNA free method to deliver the CRISPR/Cas 9 reagent and in the end the final product has no foreign gene integration.

Dr. Tripathi observed that public and academic institutions are more involved in the development of gene edited crops than private institutions because the technology is quite affordable and easy to adapt.

Though many gene-edited products are still in the development pipeline, some products have already been approved for the market. They include non-browning mushroom in US and Canada, Calyno-high oleic soybean oil in the US, and tomato rich in gamma-aminobutyric acid (GABA) to fight high blood pressure in Japan.

In East Africa, work is being carried out on bananas as the region is the third largest global producer. Though the IITA East Africa hub is using a variety of tools to improve the banana variety in the region, they are using gene editing to develop varieties that have traits which are resistant to banana streak virus, fusarium wilt, black sigatoka and banana xanthomonas wilt.