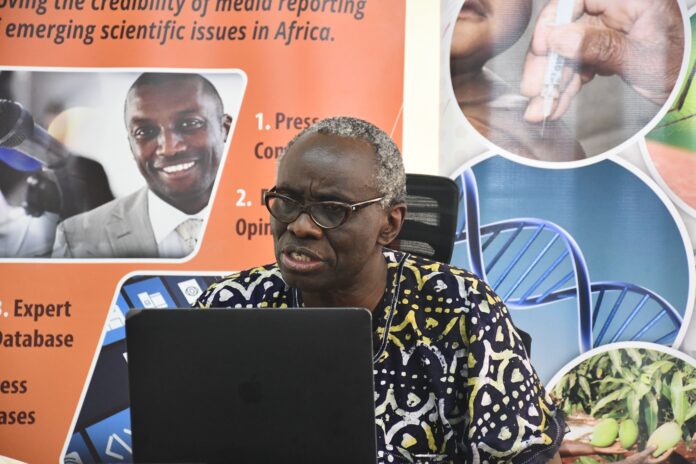 December 7, 2021, Nairobi, Kenya– Even though available evidence shows that Omicron variant is more transmissible compared to the deadly Delta variant, it is unlikely to lead to severe disease that would require hospitalisation or death among people already vaccinated.

Walter Jaoko, a Professor of Medical Microbiology and Tropical Medicine at  the University of Nairobi, Kenya, and the Stellenbosch University in Cape Town, South Africa,  affirmed this during  the Africa Science Media Centre(AfriSMC)  press briefing COVID-19 Omicron Variant-What do we know?

Prof Jaoko, who is also the Director of KAVI-Institute of Clinical Research that conducts clinical trials on vaccines, explained that the current vaccines that have been developed for COVID-19 to stimulate two arms of the immune response in the body.

Prof. Jaoko explained that mutations in the spike protein- structures that the virus uses to attach onto a cell and, therefore, infect the body- does not weaken the cell responses thus the effect on vaccine maybe partial or totally not occur.

Most of the current vaccines have used the spike proteins to develop an immunogen, which is then injected into the human body “then your body sees it and produces antibodies to fight the suspected infection”, he noted.

Additionally, he said the current vaccines help in preventing severe disease and death irrespective of the mutations unless Omicron becomes different from what is experienced from the other variants.

“As we generate more evidence, in the event that we find out that the vaccines are not effective, we can make a recommendation for a booster dose or tweak the vaccines that we currently have so that we have additional immunogen that would stimulate antibody that would specifically target part of the variant that has mutated,” the medical microbiologist said.

Omicron variant also known as B.1.1.529 was first identified in South Africa on 25 November but it is disputable because the samples were from Botswana.

However, he notes that mutations are not always bad and the virus can change to its disadvantage. There are many infections that just die on their own even without a vaccine. This is because the variant mutated but the new mutation was less easily spread and was causing less disease, Prof Jaoko said.

He said the Omicron variant surge is responsible for the third wave experienced in South Africa which has been characterised by increased cases of COVID-19, adding that there seems to be an increase in the number of cases who have previously been infected and recovered.

“People can be re-infected with the Coronavirus more than once but the numbers are usually much less compared to what is happening right now with the Omicron variant,” Prof. Jaoko said, adding that they have observed that the variant is causing milder illness compared to the Delta variant.

The Delta variant had severe presentation including loss of taste but the Omicron variant seems to be only presenting cough and sore throat, but not difficulty in breathing, loss of taste nor loss of smell, he said, noting that these are preliminary findings and more studies still need to be done.

Additionally, he noted that majority of the people that are being infected in South Africa are mainly the younger people who are less likely to become severely ill.

Besides, he said: “We need to wait and see whether by spreading it will start changing and cause more severe disease in people with low immunity, and this should also be a wakeup call for young people to get vaccinated.”

As of 6 December, 38 countries had already reported the Omicron variant mostly among travellers like Saudi Arabia, Belgium, Nigeria, Ghana, Israel, among others.

In some countries, however, there is evidence of local transmission. This means that there are people who have not got into contact with travellers from South Africa but they have the virus. The countries include Canada, USA, Germany and Iceland, among others.

Therefore, Prof Jaoko urged countries to enhance surveillance, keep on sequencing any new infection that they have so that we can better understand the circulating variant.

He stated that as long as the virus is still being transmitted, we will continue to see mutations because as the virus keeps on moving from one person to another, ‘it keeps on making mistakes, it keeps on changing itself’.

In addition, he encouraged countries to keep on reporting initial cases of clusters of infection to the World Health Organization (WHO). He termed as ill-advised the travel bans against South Africa, arguing that it should actually be commended for being a country that does a lot of sequencing and alerting the world of the  new infection.

“The fact that a country has identified a variant does not mean that it started there. Therefore, South Africa should not be blamed for the Omicron variant infection,” Prof. Jaoko stated, adding that each country should continue to do investigation- consistent laboratory assessment to improve understanding of any new variant not just Omicron.

He said Omicron variant outbreak underscores the problem of Covid-19 vaccine inequity because “if we vaccinate people everywhere, transmission will be reduced and the development of the variants will greatly be reduced.”

Prof Jaoko  advised the public to continue following the measures put in place to curb the spread of the Corona virus, that is, washing of hands, physical distancing, staying in properly ventilated rooms, wearing  masks, working indoors, avoiding crowded places, sneezing in the bent elbow, and getting vaccinated.