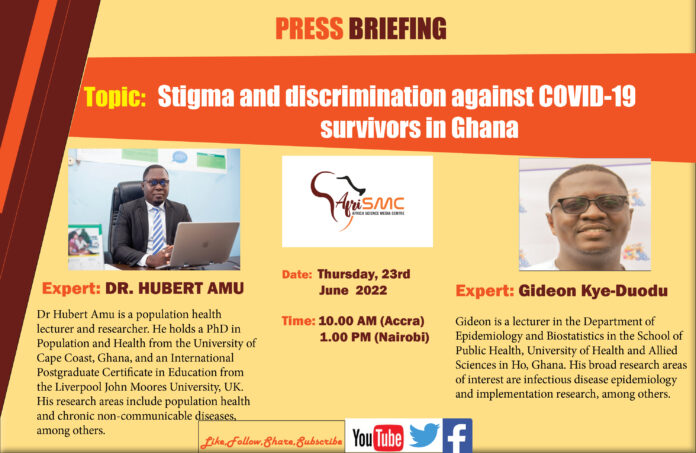 Nairobi, 27 June, 2022-Ghana has been urged to increase public education on COVID-19 to increase the level of knowledge on the pandemic while reducing stigma and discrimination associated with it, Ghanaian scientists say.

They were speaking during an Africa Science Media Centre (AfriSMC) briefing where they presented their findings on their research dubbed Stigma and discrimination tendencies towards COVID-19 survivors: Evidence from a nationwide population-based survey in Ghana.

According to the study recently published on PLOS Global Public Health Journal, almost half of the 3,259 participants (about 46%) exhibited stigma and discriminatory tendencies towards COVID-19 survivors.

Stigma, according to Gideon Kye-Duodu, lecturer in the Department of Epidemiology and Biostatistics in the School of Public Health, University of Health and Allied Sciences in Ho, Ghana and co-investigator in the study, is the negative regard, inferior status, and relative powerlessness that society collectively accords to people who possess a particular characteristic or belong to a particular group or category while discrimination is the rejection of people of different category based on their status for example, age or health.

Dr. Hubert Amu,a population health lecturer and researcher, University of Health and Allied Sciences in Ho, Ghana and corresponding author noted that the stigma and discrimination was driven by poor knowledge and attitude towards COVID-19. One in three people who participated in the study had poor knowledge of COVID-19 while about four in 10 people had poor attitude.

“We realized that participants who had poor knowledge were 91% more likely to discriminate and stigmatize against survivors. This tells you that poor knowledge is a big challenge,” Dr. Amu said, adding that those with poor attitude are almost five times likely to do the same.

With regards to marital status, almost half (49.6%) were single whereas in terms of religion, 66.6% of the participants were Christians and in terms of average income, 44% were earning less than 355 Ghana shillings.

Also, females were found to be ten times more likely to stigmatize and discriminate against COVID-19 survivors than their male counterparts.

“When that happens, it means that community level infections would continue to be high and that is where the difficulty lies in efforts to control COVID-19.”

The stigma, Dr. Amu said, has been internalized and is the reason behind the low vaccination rates in Ghana which is still less than 30%. He noted that by addressing the stigma at the populace level through repetitive information on the illness and its effects in local languages through multiple channels, there is an increased possibility of effectiveness in the improvement of knowledge and attitudes towards it.