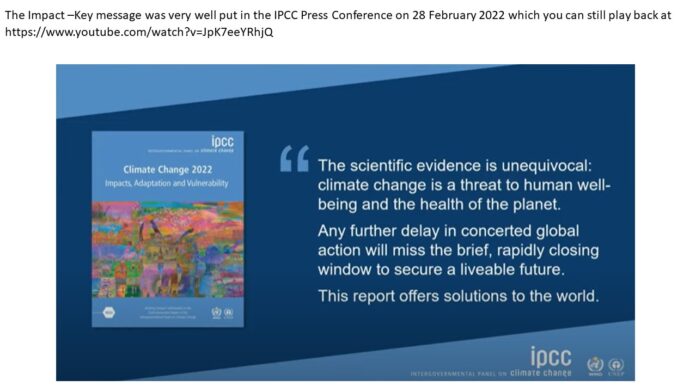 Scientist at the University of Nairobi, Faculty of Science.

First, I will just take us through the current science knowledge in the context of the potentially catastrophic impacts of climate change. Just to give a brief introduction of where we are coming from.

We are very far into the woods, with the current warming being very close to one degree centigrade and this has never occurred in the history of the planet earth.  This is one of the key evidence and messages we wanted to bring out strongly in the physical science basis assessment which was released in August 2021.

When we look at some of the key indicators of unwanted, catastrophic climate change, we can point at surface temperatures. This is where we are looking at what is happening at the minimum temperatures.

When we look at what is projected to be happening in the next two decades you see that we are very much within the 1.5 degree Centigrade warming and of course much higher warming at the end of the century. This ties very much with the information which as used to formulate the Paris agreement and the international actions of resilience building and curbing of greenhouse gas emissions during the 2020s as agreed upon in the Glasgow climate pact of November 2021.

Higher temperatures may lead to many disasters, for example, the loss of sea ice in both Arctic and Antarctic as well as decreasing continental glaciers is very worrying. Ice is very important in the climate system because it plays the role of regulating global conditions, and maintaining the gradients.  Gradients are very important for driving the climate processes.

Man’s emissions into the atmosphere include acidic gases which kill ecosystems and therefore loss of ecosystems on both the land surface as well as in oceans. Indeed, the problem of acidity in the environment was to some extend dealt with way back in the mid 1980s, e.g. the Helsinki protocol of 1985 which was probably the basis of acidic gases control implementation in chemical manufacturing worldwide. By those days, understanding carbon dioxide as an acidifier of oceans was limited. Indeed, ocean is a good remover of carbon dioxide from the atmosphere, but the carbon dioxide increases acidity level of ocean, and hence a threat to marine ecosystems.  When it comes to ecosystems, the importance of oceans in our livelihoods cannot be understated. The threat of ocean acidification is serious. Currently the oceans are nearly alkaline in terms of chemistry and you can see that acidity is poised to increase significantly with projected global warming.

August 3, 2022, Nairobi- The Marburg disease outbreak currently in Ghana is highly unlikely to evolve into a global pandemic like COVID-19 disease because...
View Post
Coronavirus

Explainers and Expert Opinions on Vaccine Manufacturing in Africa

Dr. Patrick Osewe Chief of the Health Sector Group, Asian Development Bank 1. What do we need to know about...
View Post
Expert Opinion

By Dr Olufunso Somorin, Regional Principal Officer for Climate Change and Green Growth, at the African Development Bank Carbon credit has been fronted as an...
View Post
Expert Opinion

Expert opinion on Role of Agri-Biotechnology in Mitigating Climate change