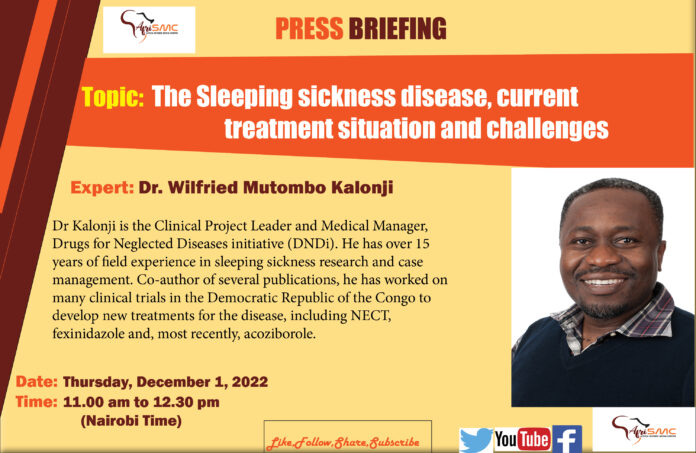 What is sleeping sickness and how does it affect people?

Sleeping sickness is also known as Human African Trypanosomiasis. It is caused by a parasite known as Trypanosoma which is transmitted by a tsetse fly. The disease evolves in two stages. The first stage, the early stage is known as the haemo-lymphatic stage. In this stage, symptoms are not specific and they are malaria-like symptoms; fever, headaches, facial edema, splenomegaly, and hepatomegaly. Most of the time people are misdiagnosed and treated for Malaria since we live in areas that are also endemic to malaria. Meanwhile, the disease continues to evolve in the body and after some time, the Trypanosoma crosses the blood-brain barrier resulting in the second stage which is a terrible and complicated stage of the disease.

What are the symptoms of sleeping sickness?

The symptoms are many; we have the sensitive disorder also known as hyperaesthesia as well as behavioral trouble which can lead to suicide at times. We have many kinds of neuropsychiatric disorders and neurological disorders too; for men, this will result in sexual impotence and for women amenorrhea and sometimes loss of appetite and it can also result in bulimia. If the disease is not treated, it is fatal.

Which areas are endemic to sleeping sickness and how many people are affected by the disease and does it also affect animals?

It is endemic to many sub-Saharan countries among them DRC where we report 70% of the cases in the world with nearly 3 million people living in areas considered as moderate to very high risk of human African trypanosomiasis. Twenty percent of the infections involve children.

In DRC, the west and central parts; in terms of provinces we have Kasai province which is the central part of DRC, and Bandundu province in the West; these two are the most affected. In DRC we have 5015 health zones and more than 300 health zones affected by the disease. For the DRC we have less than 1000 cases down from 3000 cases per year between 2004 and 2005. The treatment has become easier now hence the number of cases is decreasing.

I am not an expert but I know that the disease affects animals as well.

Why is it called Human African Trypanosomiasis, are there others, and what is the status of the same disease in other parts of the world say, Asia?

The disease is specific to Africa and the Sub-Saharan countries: Cameroon, Sudan, DRC, Congo, Angola, and all those countries. We have another Trypanosoma known as Sub-American Trypanosomiasis also known as Chagas disease because it’s the same parasite but in different groups.

What efforts has DnDi put into developing new treatments for sleeping sickness, considering that Melarsoprol was toxic and resulted in deaths of upto 5% of patients?

The strategy of DNDi to deal with this great issue was to develop a safer treatment quickly. The first strategy was based on repurposing medicines. We performed clinical trials between 2006 and 2009 in the Democratic Republic of Congo(DRC) called NECT (Nifurtimox + Eflornithine Combination Therapy.) Eflornithine was given four times a day for two weeks through infusions. That meant 56 infusions per treatment which made it expensive and unavailable. Nifurtimox was a tablet given three times per day; it was used against Chagas disease which is in the same group of parasites with the human African trypanosomiasis known as trypanosomes.

The strategy was to combine the two drugs which reduced the period and the quantity of the treatment. Eflornithine was given two times per day for seven days while Nifurtimox tablet was given three times a day for ten days. In 2009, NECT showed that it was effective and safe and the WHO (World Health Organization) added NECT to the essential medicines list as a treatment against sleeping sickness.

There was a need for more since with NECT a patient was hospitalized to get treatment and it also required a trained staff because of the infusions that were being administered; also the lumbar was being punctured to determine the stage of the disease. The ideal dream was to move to an oral drug to make it easier for the patients.

DNDi developed fexinidazole which was the first oral drug given during 10 days but it needed a meal and was given during the main meal. Fexinidazole was developed in partnership with Sanofi and its clinical trial was performed in the DRC and the Central African Republic from 2012 to 2018.

In 2018, the dose was sent to the European Medical Agency and their opinion was positive. In the same year, the drug was registered in DRC as a treatment for the human African Trypanosomiasis disease and after that, it was registered in many other countries. This was a great achievement because now we could have an oral drug that was easy to use.

Have you experienced any drug resistance from patients and what are the side effects of this new drug?

Fexinidazole has an access program that includes a pharma co-vigilance program just to follow all those aspects. In the coming months or years, we will have additional information about drug resistance. About side effects, they are most common and very light: headaches, nausea, and vomiting which are easy to manage.

Are you working on other new treatments?

Clinical trials on acoziborole were performed in DRC and Guinea from 2016-2021.

The results show that the acoziborole is safe, and effective, and has a high efficacy rate of up to 95%. The drug has no genotoxicity, thus safe. It also has a long half-life, high concentration in plasma and CSIF as well as high tissue distribution.

We hope and expect that at the end of this process, Acoziborole will be registered and will be easily available.

DNDi aims to deliver a total of 25 new treatments in our first 25 years. Thank you to our partners, our donors, and the patients.

Why is your focus only on Gambiensis Human African Trypanosomiasis and the WHO says that by 2030 it wants to eliminate the same, is it the most lethal one?

In the number of reported cases of Human African Trypanosomiasis, more than 90% is due to Trypanosoma brucei gambiense. DNDi is working on the Rhodesiense. Currently, the clinical trials in Botswana and Uganda are almost complete. We hope that the acoziborole will be effective on Rhodesiense too.

How confident are you that you will be able to succeed to curb or eliminate transmission of the same by 2030?

In less than one generation we have seen these great changes. We went from toxic drugs to this safe one. This is a great step we made with our control partners, program and pharmaceutical partners. This makes me very optimistic but to reach elimination it is a work of control program, government involvement, and research institutions. Diagnosis of the disease and its treatment have improved.

Dr. Wilfred Kalonji, Head of Clinical Operations, DNDI What is sleeping sickness and how does it affect people? Sleeping sickness is also known as Human African...
View Post
Expert Opinion

Mark Lynus, Climate and research lead at the Alliance for science and Lead author of Misinformation in the media global coverage of GMO’s 2019...
View Post
News

With the 27th Conference of the Parties (COP27) set to be held in Egypt at a time when various parts of the world are...
View Post