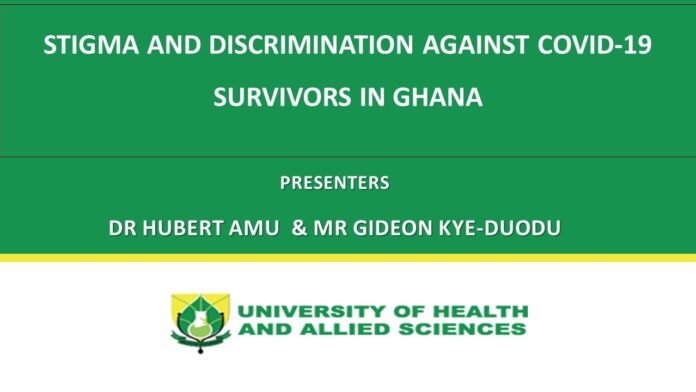 DR. HUBERT AMU is a population health lecturer and researcher. He holds a PhD in Population and Health from the University of Cape Coast, Ghana, and an International Postgraduate Certificate in Education from the Liverpool John Moores University, UK. His research areas include population health and chronic non-communicable diseases, among others.

Mr Gideon Kye-Duodu is a lecturer in the Department of Epidemiology and Biostatistics. His broad research areas of interest are infectious disease epidemiology and implementation research, among others.

What are the key findings of your research on stigma and discrimination during the peak of COVID-19 in Ghana?

What factors were leading to this discrimination?

After looking at the prevalence of stigma and discrimination, we were to look at those factors that are likely to make somebody discriminate against a corona virus survivor. We found that knowledge is key. When people have knowledge, they are able to act on that so we saw knowledge as a very important variable that we could include in our analysis.

There were a number of questions that were posed. For instance, can coronavirus be transmitted through the air and the person has to tell whether it is yes, no or they do not know. Depending on the answer the correspondent picks we then created an index variable for poor knowledge or good knowledge. Apart from knowledge, attitude is also key in people exhibiting stigma and discriminatory tendencies. There were a number of variables that constituted our attitude scale. We asked all of the questions and based on your response to each of them, we created an index variable on attitude towards COVID-19. About 43% had poor knowledge on COVID-19 and once the knowledge is poor the person is likely to act out of ignorance to probably stigmatize the neighbor.  We also realized that the outcome variable for attitude was also quite high. Thus, 43% of our 3,529 participants had poor attitude towards COVID-19. We also realized in our regression analyses that participants who had poor knowledge were 91% more likely to discriminate and stigmatize against survivors. It tells you that poor knowledge is a big challenge. Attitude was even worse in the sense that the participants with poor attitude were 4.8 times more likely to stigmatize and discriminate against a survivor. Based on these findings, we are saying that stigma and discrimination tendencies are considerably high and they are associated with risk perception, poor COVID- 19 knowledge and attitude.

Apart from knowledge and attitude, we also found income to influence stigma. We found that those who had income of between 355 to 500 Ghana cedis had 2% higher chances of stigmatizing and discriminating against COVID-19 survivors compared with those who have an income of less than 355 Ghana cedis. Overall, we realized that the probability of discriminating and stigmatizing against COVID-19 survivor increased with increase in monthly income.

With regards to gender, what were your findings?

Sex was not an important variable. This is because, there was no statistically significant relationship between your sex and stigmatizing somebody even though our regression analyses showed that women were 10% more likely to stigmatize and discriminate against COVID-19 survivors than men.

What is your conclusion from the findings?

Our major conclusion is that if this stigma and discrimination prevails or continues the way we found it, people would not be willing to go for the test in the first place because of the fear of discrimination and stigmatization should they turn out to be positive with the disease. When that happens, it means that community infection levels would continue to be high and that is where the difficulty lies in efforts to control COVID-19. We, therefore, really need to look at stigma and discrimination in order to curtail community level spread.

What are the recommendations?

Our findings call for a well-planned social education to deal with COVID-19 stigma and discrimination.  This should be done by health and information ministries and departments, the media, and health focused NGOs. I know countries have done this a lot especially at the peak of the pandemic but it looks like we have lowered our guards and that is why there is resurgence of the prevalence. It, therefore, means that we need to get back to work and intensify community education so that the likelihood of people stigmatizing and discriminating against survivors would go down. The most crucial thing in this regard is the use of credible or reliable sources where you invite a doctor (on radio and TV programmes) to dispel a lot of rumors and myths about the disease which results in a lot of the stigma that we have.

By addressing the stigma at the population level through repetitive information on the illness and its effects in local languages through multiple channels, there is an increased possibility of effectiveness in the improvement of knowledge and attitudes towards it. This will eventually result in reduced stigma and discrimination in the population since with this stigmatization people will not be ready to go for the vaccines.

Now that people have been vaccinated since 2020 to 2022, do you think the level of stigma and discrimination is still the same as it was in 2020 when you carried out the research?

As a country our vaccination has gone marginally up, but then the challenge has been that a lot of people are not accepting the vaccination. This is because the stigma is internalized. A lot of people who are not vaccinated are not willing to do so.  Though the higher levels of vaccination could indicate the reduction of stigma, but it is still less than 30%, so it means that there is still a lot of stigma prevalence.

From the findings of the study, almost half of surveyed adults exhibited stigma and discriminatory tendencies towards COVID-19 survivors, so to what extent can this finding be generalized as to the general behavior of the Ghanaians? can it be fair to say that Ghanaians generally stigmatize COVID- 19 patients?

With the generalization bit, we can confidently say that our findings are generalizable to the population. We carried out multi-level sampling where we first put the country into three ecological zones which gave equal opportunity to all sixteen regions to be selected in the first place and out of that we selected three regions from each of the clusters and out of those three, we still selected two districts and in the selection of those two districts we had to make sure that we had the rural-urban dichotomy. So, we can confidently say that our findings are representative of the Ghanaian population.

You mentioned the probability of discrimination increases with increase in income. What are the reasons behind that? Did you find out why people who have more money are more likely to discriminate?

We we can attribute this to the initial myths about the disease at the peak of the pandemic where there was this myth that it was only the rich or the whites who are going to get infected so we feel that there may be some relationship as to why the richer are more likely to stigmatize compared to those that are poorer.