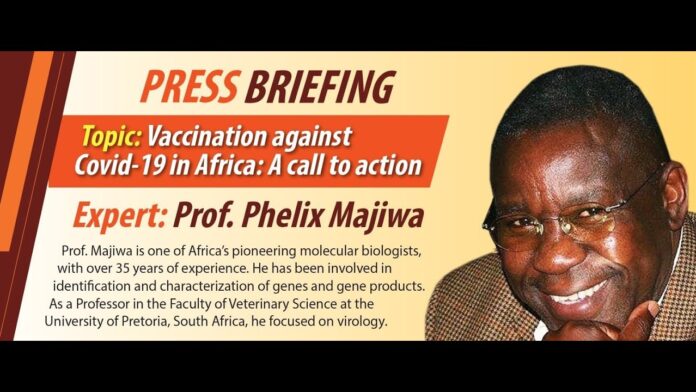 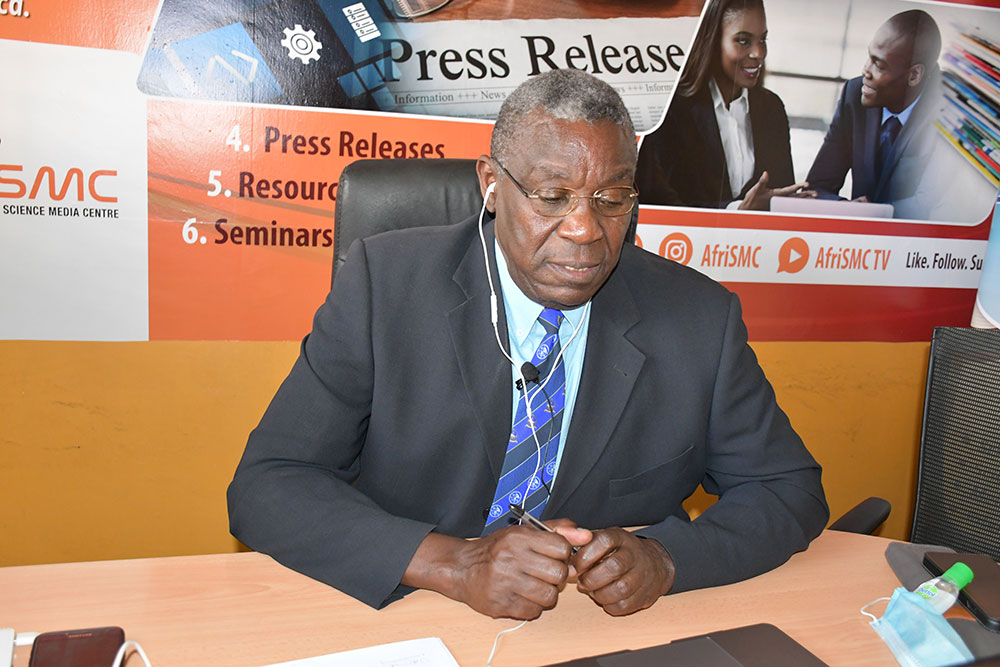 Prof. Phelix Majiwa,Virologist and Professor, Faculty of Veterinary Science at the University of Pretoria, South Africa,said:

“I am very familiar with majority of the vaccines that are used in controlling animal diseases in Africa, the processes they go through from discovery, up scaling, approval and use in the field. So, I can talk quite authoritatively about vaccines whether they are for humans or whether they are for animals.”

“I would like to insert a small disclaimer here which is I think is significant. I do not have any financial interest in vaccines that are being manufactured for any of the diseases specifically for COVID-19. So I’ll make this presentation to you very objectively and I hope everybody understands that there is no commercial interest that I have in making this presentation.”

“So the ‘S’ protein is on the surface of the virus. The virus itself is a very simple organism made up of a very small number of molecules or a very small number of parts. I’m just calling your attention to two parts here. The first one is the ‘S’ protein the next one is the one that’s on the inside and that’s the RNA which is complex with protein.”

“Given the nature of this disease and its effects, scientists have worked very hard based on prior knowledge and tools they have to find vaccine candidates that most likely will help in controlling this disease,”

“The number of vaccines available is quite impressive and remarkable in a way given how recently this disease appeared. There are a number I would like to point to you here that are from Pfizer BioNTech, Moderna and  Oxford AstraZeneca.”

“These at least in the west are the three vaccines that are called the leading ones because applications for approval have been submitted to authorities and some of them have been approved. There are a number of other vaccines that are in the pipeline at different stages you’ll see the ones in phase three. Some are in phase two and three while some are in phase one and two. At this point it is useful to remember that Kenya participated in evaluation at some phase, of the Oxford AstraZeneca vaccine.”

“The one that has been definitely approved for emergency use is the Pfizer BioNTech which is based on messenger RNA and for this particular vaccine, vaccination started both in the UK and the US within very recent times. In the UK on the 7th and in the US on the 14th so just about one week after. There was a lot of excitement particularly when these vaccines were administered for the first to humans.

“The campaigners warn that 90% of people in poorer countries will not get the vaccine in 2021. Although they are here talking about the Pfizer BioNTech vaccine, this statement probably will hold true for the majority of the vaccines that will be approved in the next maybe months. So about 90% of people and therefore quite a good number of developing countries may not have access to these vaccines.”

“I would say in most instances they are mixed up with half-truths but nonetheless people read them and pay attention to them because of its effects otherwise had they not have such effects, they would not be posted on a continuous basis anyway. There is a real concern that these messages are reaching Africa and could have negative impacts. The consequence of these messages is that they somehow shape public perceptions of these vaccines, resulting in reluctance or refusal to be vaccinated.”

“Professionals with required information on vaccines and vaccination and disease control should also join this work. Obviously community leaders as well because they are the people who are very much on the ground and leaders should be involved.

“With this misinformation widespread, I think we as Africans should make sure that they do not take root and if they do take root, they could be disastrous in many respects. One, they could make vaccination against Covid-19 very difficult, much more difficult than it is already, compounded by other things and the consequence is that safety and health of the continent could be compromised.”

“This will have not just direct health effects but could also have effects on people who travel, people who do commercial activities with the rest of the world and therefore it could spill into economic ramifications.”

“As I said earlier, these pieces of misinformation are very many but they can be grouped into a number of categories. There are some which are directed at vaccines in general, so a vaccine for any disease whatsoever, then there are some addressed to specific vaccines and others are addressed to specific companies that manufacture vaccines or they could be directed against an individual even if they are only remotely connected to a vaccine or vaccines.”

“I must say here that a very significant proportion of the misinformation is coming from church leaders unfortunately either because of their faith or because in one way or another. They oppose the use of vaccines but that is the truth that a lot of misinformation comes from people that are in the group that can be classified as faith leaders.”

“So, the information required should be objective and balanced, it should be based on science underpinning the vaccines and should be appropriate and relevant for the readership but should not be selective. In other words, one should not select and present only the positive or the good parts of the information, which is required, but nonetheless should rather present in totality and have it in a language that is understandable and it should be appropriate and obviously respectful.”

“It shouldn’t be presented in a patronizing manner and I think, this can best be done by people who can be trusted by the readership. There is often presentation of information by other people with whom the readership cannot identify and I doubt if those pieces of information can be very useful if the reader or the hearer does not trust the person who is giving the information.”

“One thing I can say about Corona viruses is that they are not new viruses. They have been there. They have actually been causing about 30% of common colds that we actually experience even before we had COVID-19. So it is not a new group of viruses actually. In this group there are also other viruses like the SARS-coV, there is another one called MERS and if you remember sometimes back there were actually outbreaks of the MERS and the SARS infections that lasted only a few months but also caused a few number of deaths across the world. So it is important for us to know this.”

“As more vaccines come in, the phases will overlap. The vaccine is given as an intramuscular injection; that is IM. You are injected on what is called the dented muscle, on your outer side of your left side, that’s the recommended area, and the dosage is 0.5mls.”

“Its true Moderna and Pfizer when you look at their rate of protection is a bit higher as compared to AstraZeneca. However, the challenge as I said has been on how to store them as some of them require up to negative 80 to negative 86 degrees centigrade to store them which we do not have the capacity at the moment. So even if we were to bring them they will not actually help us. Remember these ones you need to get the vaccine when it’s active. Otherwise f you store them in the wrong place they become useless. That’s the main reason as to why we chose AstraZeneca. One thing I must say about vaccines is that you are targeting to immunize as many people as you can. That is to prevent them from the severe form of the disease. That is the same thing that has been applied with other vaccines.”

“My suspicion is that as we move forward, the pandemic goes down then there’s a likelihood that the vaccines will be introduced to the national CEPI program. So it’ll be standard thing where people receive it even among children. But also wen new strains come up, and new vaccines against the new strains are developed I’m not sure or I wouldn’t know if the government will still be giving them for free unless the pandemic that continues then probably they would be charged. But at the moment all vaccines are free.”